Crossing the Gulf of Mexico 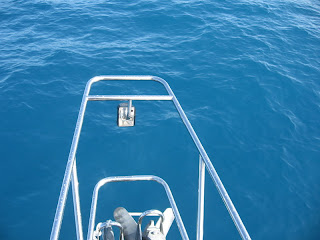 March 17 thru March 27. Sailing on Little Wing, a beautiful Island Packet 370, owned and skippered by Steve Tedford of Gulf Shores, Alabama. Crewed by Mike Darden, Bob McDonald and Charlie Stewart. Sailed East from Gulf Shores to Port St. Joe, then to Apalachicola to wait on a weather window for the crossing. Sat two days in Apalach waiting for a storm system to pass, then sailed out on Thursday morning. Ran aground at low tide in the middle of the channel making our way across Apalach Bay to Government Cut which puts us into the Gulf. Finally we get out to sea in the safety of deep water, and set sail on a port beam reach, winds at 16 kts. Later that afternoon as the winds subsided, we put up the new cruising spinnaker for the first time on Little Wing. She was fabulous. That sail makes Little Wing at 12 tons sing and dance.

At dark we took the spinnaker down and went under jib and main. During the night winds picked up to 20 kts., and in the early morning hours, they piped up to 27kts. That made it a little choppy in the Gulf, but the boat was made for that sort of thing and never missed a beat. We, however, had to adapt. Our sail from Appalach to Marathon Key was 72 hours at sea. We made port at Marathon Marina, and had showers and electricity, cable hook-up and all the amenities of luxury. We then departed Marathon early the next morning on the Atlantic side and sailed North up Hawk Channel. Winds were from the NW and we were able to sail on a port reach all the way to Angelfish Cut, which is a channel we could take from the Atlantic to the Bay of Biscayne. Although the winds had picked up to about 18-20 kts from the North, we were able to anchor up for the night on the lee of Pumpkin Key to enjoy a beautiful sunset over Key Largo. The next morning we set out up the ICW for the 24 mile stretch to Miami. We anchored up in No Name Harbor for the night, and the next day sailed over to Dinner Key Marina which was our Miami destination.