On June 14th through the 20th, 2009 Jim Jones, Quinn Stewart and Charlie (that's me) sailed Briar Patch from Gulf Shores to Apalachicola FL and back. We left Sunday morning on the 14th and went East to Pensacola. From there we went out the ship channel into the Gulf, and at about 20 miles out, set our course at 107 degrees. With the wind off our starbord quarter at about 15-20 kts, we were able to beam reach all day, all night and make landfall at about 10:00 the next morning at Port St. Joe. We cruised about the St. Joseph Bay a while and then cut up the ICW through the swamp to Apalach. When we got to Apalachicola, we tied up at the Waterstreet Inn and went ashore and immediately ate several dozen raw oysters. That's the only place on the planet that I will eat raw oysters. We eased out to the edge of Apalachicola Bay, and after assessing the shallow water and the Govt. Cut in St. George Island, we headed back through the ICW to Panama City and anchored up in St. Andrews Bay, just off Shell Island. That sunset, the emerald water, and the pristine white sand dotted with palms and pines was as pretty as any in the whole Gulf of Mexico, including the Keys. At 0600 the next morning we headed out the PC ship channel about 10 miles and then set our course on 283 degrees toward Destin pass. We were pointing close to the wind all day, but had a terrific sail with the wind SW at 14 knots. At 1645 that evening we entered the "rocking and rolling" Destin pass. Not a pass that I would recommend for tender hearts, and never, never, never would I attempt landfall there after nightfall. We came in at low tide, and were able to get under the Destin bridge, by just inches. Our mast is about 48 feet with light, windex and antenna. From there we went on in to Fort Walton and anchored off the municipal park pier. Once we reached Pensacola, we anchored up in Big Lagoon and listened to the surf of the gulf across the spit of beach. The good thing about anchoring off Pensacola is that you get a really nice wake-up call when the F-14's from NAS take off and scream over your head. Of course the trip wouldn't be complete without a stop at Pirates Cove at Perdido Bay back in Alabama. All in all, we traveled 470 miles, and burned 27 gallons of diesel for the whole trip; in a 6 ton boat. Normally we should not have run the engine so much, but the entire trip back, heading West, we were into the wind, and as it turned out, we would have had to have waited two weeks for it to eventually turn favorable. We didn't have time for that. That's a difference in the sailors of today and those of yesteryear.

Posted by Charlie Stewart at 8:37 PM 2 comments: Links to this post 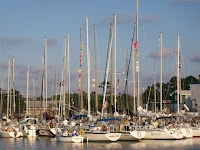 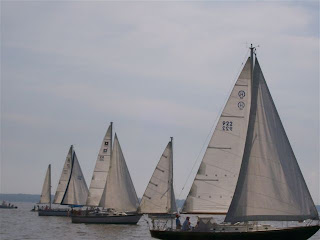 On April 24, 25 and 26 2009 Jim Jones, Quinn Stewart and Charlie sailed the Briar Patch, a Pearson 323 sloop from Gulf Shores to Mobile, then raced from Mobile to Dauphin Island and then back to Sailboat Bay in Gulf Shores, AL. This is our 24th DI race. We didn't win a trophy, but we did have a good time, and actually corrected over a boat that was much faster than us. Hooray for handicaps. This was the first shakedown cruise after the major refurbishment of the mast, standing and running rigging and power plant in 2008 and early 2009. All systems went well and nothing broke or fell off the boat in what turned into some pretty rough seas and windy conditions. That's us at the starting line (above photo), not the Hinckley B40, but the Pearson right behind it. Life is good, but not that good.

Posted by Charlie Stewart at 7:47 PM No comments: Links to this post